Under this name there are three cemeteries established at different times, which are located half a kilometre away from tartu Road towards the west, downtown from Ülemiste sand drifts. These are the former Russian Orthodox Cemetery established in 1775 and known as Aleksander Nevski Cemetery, Estonian Vana-Kaarli Cemetery opened in 1864, and Military Cemetery established at the end of the second decade, all in all about 18 hectares.

The biggest among the above-mentioned cemeteries is Aleksander Nevski Cemetery with the area of 13,01 hectares. It is the oldest among the cemeteries of Tallinn used today, its contemporary cemeteries were Kopli and Mõigu. Tens of thousands of people have found their last resting place at this cemetery over 200 years, there are many outstanding figures in history and culture among those people. The cemetery has been established at the time when over half hundred years had passed from the northern War that ended with Russian victory, 65 years after Tallinn surrenderedd. Probably, giving a name for the cemetery also refers to that victory, which was crucial to the fate of the Baltic States. In 1856, traders of Tallinn, Aleksandr Jermakov and Ivan Germanov had a small church of brick to the cemetery dedicated to Aleksander Nevski, which was destroyed as a result of bombing by the Soviet Russia on March 9, 1944. Near the place of the church the chapel building of red bricks has remained. Originally, the cemetery had occupied the relief, which reaches farther from the church. Most part of it has been for the purpose of military cemetery, therefore there are signs on the graves of warriors as the older grave marks, the part of which is the historical memorial under public protection. 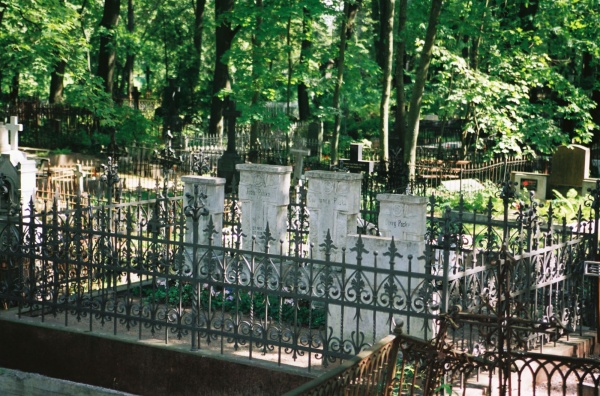 Vana-Kaarli Cemetery
The two cemeteries are separated by a high limestone wall, in the northern part of it there is a hole where a wide road runs from one cemetery to another. Here the so-called Vana-Kaarli Cemetery, which is ninety years younger than the so-called Russian cemetery described above, and it has been established in 1864 as the cemetery of Kaarli Congregation because Kalamaja Graveyard ecome too small for the growing congregation.

There is also archaic milieu at the Vana-Kaarli Cemetery and we can see quite remarkable things like old grave marks that are over hundred years old. Quite a few limestone or forged crosses from the 19th century have become rare. On the right side of cemetery's main road we can see a 1,5 metre high statue of red granite with the bust of composer Peeter Süda. The text on the front side of the statue brings back to the memory one of the first lecturers of Tallinn Higher Music School and musician Peeter Süda (30. I 1883 - 3. VIII 1920). The grave statue created in 1927(sculptor Ferdi Sannamees) was destroyed in World War II in 1944 and it was restored in its original form in 1970. By plaster models of F. Sannamees. (In the beginning of 1990s the bronze bust was stolen and it was replaced by granite bust.).