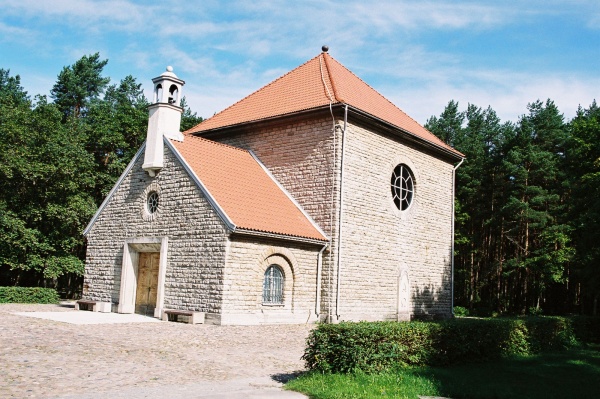 We can consider Metsakalmistu one of the richest cemeteries in Estonia for its cultural monuments.
Metsakalmistu was established as the public city cemetery in Kloostrimetsa in 1933, the area of which was first planned to be 24,2 ha and it has become 48,3 ha to the present day.
The official opening of the cementery was organised in 1939.

Metsakalmistu is the cemetery with a natural look, which design requirements caused major arguments and reproaches at that time. Namely, placing crosses, fences, edges was forbidden, maximum dimensions of the gravestone were 80x50 cm.

The cemetery was supposed to maintain the effect of natural forest, which is in force till the present day. In design, monumental gravestones have been avoided later on too. Nowadays, maximum 1,5 m is allowed for the height of the stone while for the edges of the burial places, natural lawn edges, covering with moss mat, bordering with flowers etc., are still required.

The chapel was built of limestone between 1935-1936 by the architect H. Johanson. The chapel was set on fire by the vandals and it was restored by the the help of Tallinn City Government in 1996. In Metsakalmistu Cemetery, plots of land have been allotted for the Theatre, Sports, Composers, Writers, Artists, Journalists, Doctors and Architects Union, Memento, Soomepoisid, veterans of the Estonian War of Independence, scientists, etc.

The first to be buried in Metsakalmistu Cemetery in 1933 was E.Vilde, the burial place of the family of the first president of Estonia, Konstantin Päts, is also located here. From well-known people, Lydia Koidula, Anton-Hansen Tammsaare, Johannes Kotkas, Paul Keres, Raimond Valgre, Georg Ots, etc., have also been buried here.