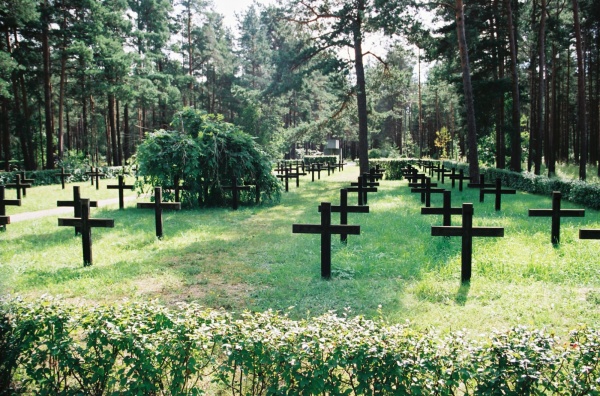 Liiva Cemetery is located in Tallinn, at 34 Kalmistu Road. The cemetery was put to service in 1935. The first to be buried at the Liiva Cemetery in D section on January   28, 1935 with the civil ceremony was Hans Martinson, member of the Riigikogu who belonged to the Estonian Socialist Labour Party of that time. The official opening of the cemetery took place only on September 22, 1935.
In the territory of the cemetery there is a chapel (architectural monument) built in 1935.aastal and memorial of the victims of the Red Terror.

Liiva chapel has been designed by architect Herbert Johanson in 1934. It is a functional sacral building made of square stone.

The main entrance of the cemetery, the chapel and the memorial form the main axis in the territory discussed. This is the symbol of the Liiva Cemetery, landmark for the visitors of the cemetery.

With its area of 64 hectares Liiva was the biggest cemetery in Tallinn till 1978. It is fully functional by its nature and soil.

Originally, when planning the cemetery, it was meant to hold the principle of maintaining the virgin forest landscape on bypaths between the sections of burial places but later on this idea has been given up as the number of funerals has increased. Initial bypaths are very wide. Part of the territory of the cemetery in the east across Valdeku road has remained as a virgin forest land that has not been organised. After careful and purposeful organising more natural parts of cemetery could appear there. Although in developing the Liiva Cemetery natural principles have not been taken into account so far, they should be applied more in new sections that  will be put to use, especially in the close neighbourhood of the chapel that has initially been the forest land. In the sections that are still in use placement of tumuli in straight lines and burial places with rigid concrete edges dominate. Liiva Cemetery has wide sections with line graves (for the purpose of burying the patients of the homes for the disabled and other deceased who have no folks) that are first turned into a green area but later these graves stay abandoned  and  make the place look shabby